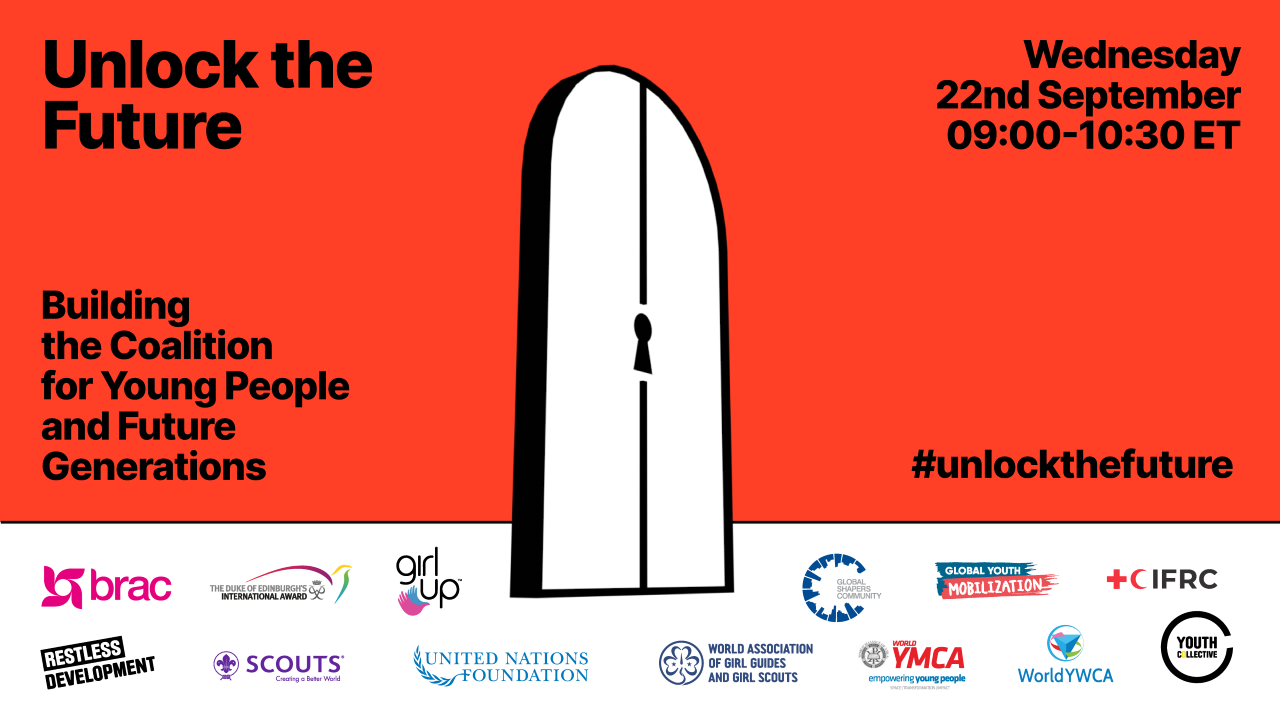 Building the Coalition for Young People and Future Generations

At a time when young people face a series of emergencies they did not cause, how can the world come together to listen to their voices, respond to their demands, and work with them as designers of their futures?

In the week that global leaders gather for the opening of the UN General Assembly, this high-level virtual event marks the beginning of the coalition for young people and future generations.

We will commit to working together to deliver young people’s priorities for the next and future generations and explore how we can overcome the barriers that prevent young people from acquiring the power and influence to shape their futures.

With half the world’s population under the age of thirty and ten billion people yet to be born this century, we are inspired by this opportunity to put young people at the center of international cooperation and to renew our efforts to secure the future of humanity and of the planet.

This meeting is hosted by the world’s most far-reaching youth-led and youth-focused networks and movements including BRAC, Girl Up, Global Youth Mobilization, the International Federation of the Red Cross (IFRC), World Young Men’s Christian Association (YMCA), World Young Women’s Christian Association (YWCA), the World Association of Girl Guides and Girl Scouts (WAGGGS), the World Organisation of the Scout Movement (WOSM), The Duke of Edinburgh’s International Award (The Award), Restless Development and the Youth Collective, the Global Shapers Community at the World Economic Forum, and the UN Foundation.

At its heart will be the voices of a new generation of leaders, activists, and thinkers, in dialogue with their peers from other generations. If you are committed to unlocking the future, we invite you to join us – whether you are young or old. Please register here. This event will be in English with subtitles in the five other official United Nations languages.

“We (young people) are experts, we live the experience and through the Global Youth Mobilization we have seen the impact that has been brought by young people. Invest in young people with meaningful engagement!”, a clear call to action made by Global Youth Mobilization (GYM) Youth Board Representative, Helga Mutasingwa, at the opening ceremony of the 2022 World Health Summit on Sunday, 16 October in Berlin.
Read more

As the United Nations General Assembly meets for the first time in three years, education reform is at the top of the agenda. Over three days, young people, policy makers, civil society organisations, governments and leaders came together to debate, discuss, and prioritise actions as part of the Transforming Education Summit.
Read more

Presentation of Youth Declaration at the Transforming Education Summit

The Transforming Education Summit, which brought together world leaders to address the global education crises that was exacerbated by the COVID-19 pandemic, concluded on 19 September 2022 in New York. The summit was an answer to the Our Common Agenda report, that calls for more inclusive and effective cooperation in response to arising global issues for the next 25 years. During the summit the Secretary General’ s Youth Envoy and youth activists presented the Youth Declaration that looks at the disproportionate impact of education inequity for students in low- and middle-income countries.
Read more